Darden's New Kid on the Block: Eddie V's in Orlando

A couple of months ago, I was invited to attend a charity media preview of the new Eddie V's in Orlando, an upscale seafood restaurant that lives in the space where Timpano Chophouse used to sit. That being said, we only paid for our alcohol tab (the proceeds of which went to Boys & Girls Clubs of Central Florida, Second Harvest Food Bank, and other worthy causes), so please keep in mind that we didn't pay for our meal at Eddie V's as you read this. 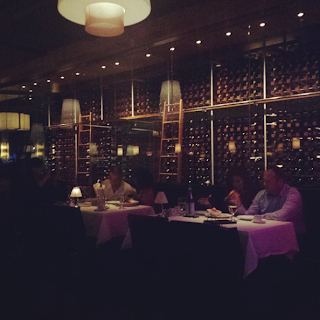 I'd seen the restaurant a couple of times during trips away, a few in Houston and Austin, etc. This is the first Eddie V's to open in Central Florida, even though it's a Darden restaurant and the corporate HQ is located here.

The place is gorgeous, I have to say. Dimmer and more moody than the decor at Oceanaire Seafood Room, but still recalls the late 30s, early 1940s vibe of fringe and sequins and drinking champagne and dancing on tables. The waiters are outfitted in white tuxedoes, which was a lovely touch, but a little overkill for those of us more likely to be dressed for Tijuana Flats than haute seafood (this is Orlando, anyway, a city with a perpetually casual dress code). 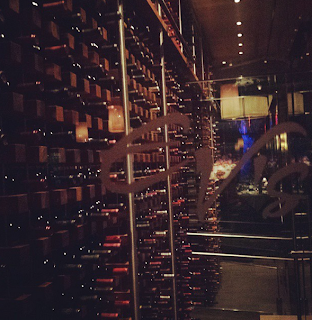 The service was really excellent, but I was a little piqued when I found out that there were four separate menus circulating around the room, each table given a different set of choices. What if *I* wanted the sea bass? What if I had a serious aversion to the filet and wanted a bone-in ribeye instead? Our server assured us that he could "make it happen," but I still had a sinking feeling that the heavier-hitters in the room (read: the ones with the fatter checkbooks or expense accounts or more pageviews) were being given fancier choices. 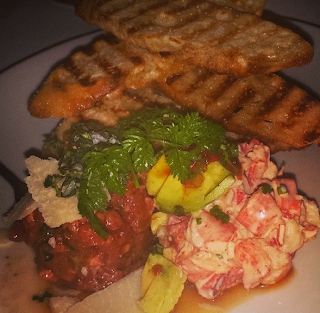 All things considered, the food we ordered was very good. We left happy and full and satisfied. Our first course was the steak and lobster tartare, which were served side-by-side and both very good, though the lobster was not served raw (luckily), and so didn't exactly qualify as a tartare.
It was lightly dressed, instead, with a creamy dressing next to the beef which was really delicious, tender and buttery when spread on the toasted baguette.

For our entrees, Cliff opted for the filet while I went with the halibut, a fish I like very much but don't normally buy. The halibut was nicely pan seared and sat atop a creamy sweet corn and edamame succotash with morsels of pork shank lending a nice, smoky porkiness to the dish, and aiding the wine pairing -- a lightly tannic pinot noir worked well. 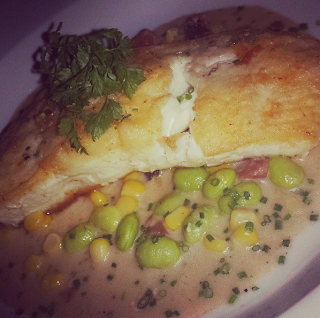 The filet Cliff ordered was really excellent. We've been to more than a few steakhouses in recent years, including Bern's in Tampa, which we went to for our anniversary this year, the Bull & Bear at the Waldorf Astoria in Orlando, Taste of Texas in Houston (which was awesome and worth a separate blogpost) and Christner's Prime Steak and Lobster in Maitland. This steak, unassumingly positioned at the bottom of the menu at Eddie V's, was good enough to go up against any of the ones we'd had at any of the aged beef temples we've visited.

Dessert was beautifully presented -- flaming Bacardi 151 and Grand Marnier poured over a gooey butter cake topped with caramelized bananas in their version of Bananas Foster, but I was so full and uncomfortable that by the time dessert came and we'd spooned up a few bites, our server was compelled to ask whether it was to our liking and whether he could bring us something else. 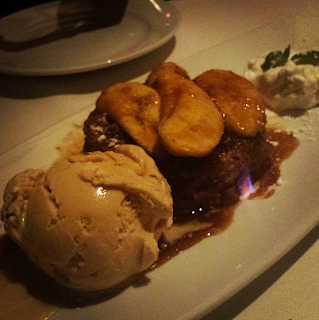 Eddie V's isn't cheap -- our full bill ended up at $157 for an appetizer, two entrees, a dessert and two glasses of wine, but the service and food was so top-notch, we forgot entirely we were eating at a chain restaurant, which was worth the price.

There are a couple of dishes in my repertoire used mainly to clean out the refrigerator.

After working in restaurants and having a refrigerator of my own for quite some time, I've learned that cleaning out the refrigerator is a good idea, but throwing away perfectly good food (perhaps because it's cluttering your space or has just a teeeeeeny tiny bit left in the jar) is not a good idea.

Enter this paella. Usually it's chili that claims the "kitchen sink" one-pot spot, but Cliff requested paella, I didn't feel like going out for ingredients, so I figured I'd make do with whatever was in the kitchen, the freezer and the fridge. And man, it turned out great. 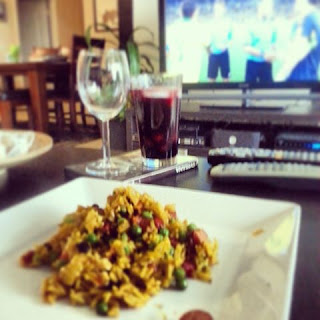 Who'd have thought that a couple of things I have in the house on a regular basis could make such a delcious dish. Some all-beef hot dogs stood in for fancy sausage; a can of sardines (which I know many of you won't have in the house, but canned tuna would substitute nicely) was delicious for the fish element; a little pre-sliced deli chicken works to cut down cook time.

Other pantry/fridge staples: rice (I used Jasmine), turmeric (you know you have a bottle and don't know what it's for), frozen peas, onions and garlic.

See the recipe below. Interchange the meats with whatever you might have on hand (SPAM! Kielbasa! Solid white tuna in oil or water!) and you'll end up with something delicious.

BONUS! A recipe for my "makeshift" sangria (pictured in the first photo) is at the bottom of the paella recipe. Enjoy!

Saute the onions and garlic in hot olive oil until translucent. Add tomatoes and red peppers, cooking another 3-4 minutes or until some of the liquid from the tomatoes has released. Add spices (turmeric, garlic powder, ground ginger, cayenne) and stir until fragrant. Add rice and 1.5 cups water. Stir to combine with ingredients in the pot. Bring to a boil and then reduce heat to a bare simmer. Cover and cook 15 minutes. Once the rice has cooked, fold in your chosen proteins (fish, chicken, sausage) and the frozen peas. Recover to heat the proteins and peas through, on low (or no) heat, another 3-5 minutes. Season to taste.

1 bottle red wine (doesn't have to be great -- in fact, it's better if it's not great)
1 cup creme de cassis
juice of one navel orange

Combine and serve over ice.
Posted by hollywog at Monday, July 01, 2013 No comments:

Will Cake For Work

It's been quite a while since I've made a chiffon cake, and it's no secret that I adore them. Actually, I adore anything made with meringue, and chiffon cake is the combination of a simple French meringue and a typical cake batter. Then, they're folded together and baked in a tube pan, which, coincidentally, is my favorite thing to bake in.

My love of all things meringue comes 1.) my love of marshmallow, which meringue ISN'T, but is very similar to, and 2.) the sheer volume of angel food cakes I made when I was a pastry chef at Cypress Restaurant in Tallahassee. Literally, I made one cake per day, and worked there for about a year, so you do the math. I got really, really good at folding fluffy French meringue with dry ingredients, which is teeny, tiny step away from making a chiffon cake.

Last night, the arts and culture editor at Orlando Weekly, who I have known a long time and have made a friend, tweeted at me right before the U.S. Men's National Team was set to take on Mexico at the Azteca, in what would be a historic match for U.S. soccer. Here's our conversation:

I'll forgive her for the ™... the proper superscript for Tupperware is ®.  I only care because it used to be my job to care.

No matter, though. This is what came out of it all...

I used a different recipe this time than I have in the past -- this one from Bon Appetit. I usually use Baking Illustrated, from the editors of Cook's Illustrated magazine, but their chiffon cake recipe is faulty (which is REALLY unusual for Cook's Illustrated), but this recipe was fantastic.  Find it here.