Saving the Earth, One Pizza at a Time: Pizza Fusion 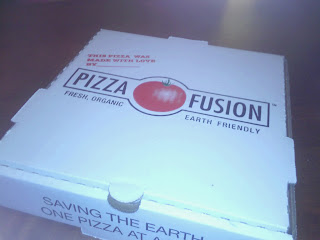 One time, I took my boyfriend to Dandelion Communitea. It's a vegan restaurant in Orlando. My boyfriend is Latin American. He eats vegans for breakfast. After dinner, a salad and a cup of vegan chili, we went to Wendy's for a Baconator. Vegan restaurants don't get a second date with us.

When our friend and favorite vegan Marissa asked me to accompany her to Pizza Fusion on Sand Lake Road this past week, Cliff was glad it wasn't him. He was sure it was going to be run over with hipsters, it would smell like hemp and dredlocks, and he'd leave hungry, making a beeline for the McDonald's next door for a quarter-pounder. 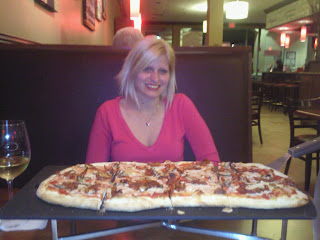 When we got to the restaurant, I was impressed with the menu. Every ingredient is organic, they offer whole wheat crusts and organic wines. It's not a vegan restaurant, but the BBQ chicken pizza has cage-free bird on top and organic pepperoni (similar to the halal pepperoni our Muslim friends bring from the halal Hungry Howie's).

The Tuesday happy hour special is a killer - buy a large pizza (pictured with our favorite vegan, Marissa) and get two complimentary glasses of organic/sustainable wine or beer. We ordered the Very Vegan pizza (no surprise) on white crust. Bubbly and delicious, covered in veggie cheese, organic tomato sauce, cremini mushrooms and sun-dried tomatoes. Filling and fresh. Accompanied by sustainable Zinfandel (yes, Jo the Server, I'm aware that it's a red wine), it's a great choice.

I asked the server if the napkins were ethnically-sourced. She didn't get it. More proof that hipsters have no sense of humor. 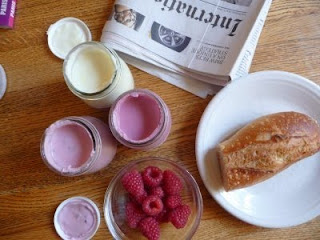 Okay, I've sung the praises for French yogurt long enough. I do miss the simple clear glass jars with noisette (hazelnut) flavored creamy goodness made from unpasteurized sheep/cow milk blend, but man, I found some yogurt to knock your socks off - or at least to knock your khaki-colored safari hat off.

I'm usually one to head to Whole Foods first as part of my Saturday-after-pay-day grocery shopping marathon, where I pick up anything I can't find at my local Publix (best grocery store in the country, I might add). I love organic yogurt, especially from other parts of the world. That's not to say that Stonyfield Farms (and others) don't have good yogurt. They do. But THIS stuff - Wallaby Organic - is exceptional. 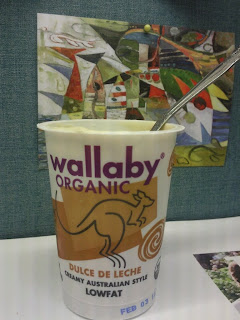 The yogurt is creamy and tangy, a bit looser in texture than UH-merican yogurt (much looser than Greek-style), and has that extra tang that reminds you that what you're eating has gone through very little alteration. I'm partial to the Dulce de Leche flavor, I think it's the bee's knees, but the blueberry, blackberry, and strawberry/banana flavors are great, too. It's yogurt - plain and simple - actually, dulce de leche and simple. Delicious.

Available for around $0.99 at Whole Foods Market. Get some. 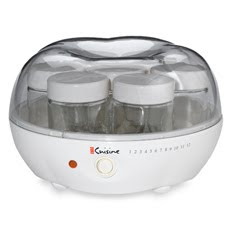 I just ran into this yogurt maker at Bed Bath & Beyond. I've heard it works...sort of. I haven't tried it. The chance to make homemade yogurt for $29.99 is just too good to be true. Right? Anyone tried it?
Posted by hollywog at Wednesday, January 20, 2010 2 comments:

Here's a bit of news: there are almost no decent restaurants open in Orlando on Sundays. This is what we went through to go to dinner last night. 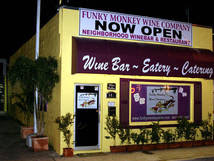 We ended up finally getting a reservation at Funky Monkey Wine Company, a tiny, yellow 30-seat bistro/sushi bar/wine bar on Mills Ave (above), open since August of 2007, now expanded to a more tourist-friendly location on I-Drive next to Maggiano's and Capital Grille. It's a good thing, that, since visitors to Orlando often only see the Bennigan's and TGI Fridays that dot our landscape and completely miss the eclectic offerings Orlando hides under its skirt.

That being said, I was left a little bit confused after glancing through the menu. The restaurant seems to be going through an identity crisis, and the slogan on its website 'stylish yet unconventional' seems an understatement. Half of the menu is classic New American - bison burger, inventive salads, wild mushroom risotto - and the other half is an extensive sushi menu.

While one of our dining companions ordered a gorgeously cooked bacon-wrapped pork tenderloin and Merlot, his girlfriend enjoyed an Asian pear sake-tini and a sushi roll. I've seen this kind of thing before, at restaurants serving spaghetti and meatballs alongside bangers and mash. I enjoy fusion more than the next critic - but these kinds of juxtapositions just leave me feeling confused.

I enjoyed the bottle of 2005 Aquinas Napa Valley Merlot, easily drinkable with smoke and tobacco notes, but scoffed at the $38 price tag. For a $9 bottle of wine, a 40% markup seems a little much. The chef's soup, roasted red pepper bisque, was deliciously creamy and rich, though slightly overseasoned. Instead of the mountain of Parmigiano, I would have preferred some fresh basil to lighten things up. I really enjoyed the Blue Monkey Salad: tender spinach leaves with blueberry balsamic vinaigrette and porcini/shiitake/oyster mushrooms and 'bleu cheese.' It's in quotes because though bleu was on the menu, goat was on the plate. I enjoy goat cheese too much to protest.

Funky Monkey Wine Company is a great addition to Orlando's eclectic New American cuisine wave, though I think it may be getting too big for its britches at this point. The verdict: B-. Cons: slightly overpriced, lacks culinary finesse. Pros: good use of imagination, excellent service, inventive dishes, romantic.
Posted by hollywog at Monday, January 18, 2010 2 comments: